Bodhicharya News and Blessings from India! 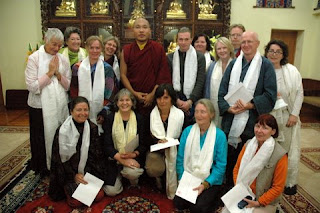 A small group of Irish students and friends of Ringu Tulku have recently returned from a visit to India, which included 15 days at the Kagyu Monlam teachings.
Fifteen of us, both from the UK and Germany had a private audience with His Holiness Karmapa, who answered questions and blessed photographs of friends who are ill. We requested a long life prayer for Ringu Tulku which the Karmapa gave us at the end of the teachings. It is exquisite.
( see below).
The Monlam schedule required us to wake before 4.30 am each morning to be sure of a seat in time for the Sojong Vows at 6 am, followed by a recitation of the Refuge Prayers and the Heart Sutra in Sanskrit. The day continued with teachings and prayers ( and gallons of sweet or salt tea and a bread,) until 5 pm. Since last year, thanks to Ringu Tulku and a team of translators, all of the prayers had been printed in English, and it was such a pleasure to have and appreciate the poetry of the devotional texts. Everything was translated into 8 different languages over FM radio - French, German, Spanish, Chinese, Korean, Polish, and Russian, while the English speakers were able to once again enjoy the voice of Ringu Tulku as the conduit for all the Karmapa's teachings.
Meals were served to the 1500 Western and Chinese monlam members at the Mahayana Hotel which is also the central social hub and organisationally everything appeared to work like a dream.
No detail was missed for 10,000 people who spent 9 days together under the bodhi tree, experiencing the unfolding of a perfect Buddhafield: we were given a direct transmission on the perfection of the Paramitas.
One of the highlights was the Akshobya Purification Ritual, an evening fire puja at the Tergar Monastery, which is his residence for the duration of Monlam and where the Chinese and Western Teachings are given before and afterwards. It is a mile or so from the Mahabodhi Temple, in the fields away from the town. 16 monks had just completed a 15 day Akshobya rereat and only they, with the Karmapa, were allowed inside the shrine room. We 30 or so curious onlookers sat around the outside, as all the doors were opened to ensure the best possible view for us. As the puja progressed the whole of the shrine room appeared to emanate more and more golden light until finally two fires were lit, one inside, and one outside the temple. The puja ended after more than two and a half hours when the Karmapa joined us at the outer fire, to bless and burn the lists of names of those who have died. It was almost midnight, the Karmapa's day with us had begun at 6 am, and as we walked home, he waved goodnight from the temple roof. ( see photos on www.kagyuoffice.org) 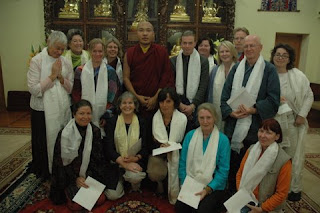 There are many beggars who travel to Bodhgaya, especially during Monlam. They confront us with the meaning of the teachings, without compromise. It is a time of opportunity for these people who, like ourselves, also come from far away in the hope of sustenance. Last year a soup kitchen was set up in a field nearby by the Karmapa's sister, and this year a small group of Rokpa volunteers from Samye Ling joined in, feeding a few hundred mouths each lunchtime. The challenge is not only to ensure everyone receives something, but also to consider the cost of waste in the environment - next year the plan is to have plates especially made from banana leaves.
During his talk, 'Living the Dharma', the Karmapa reminded us that we live in many different societies and environments, but the most important thing is that we always keep other beings in mind in a lively way, we mustn't lose contact with those we wish to benefit. He said the main practice is not to give up on sentient beings. That is the most important thing: if we can keep the happiness and the suffering of many in our mind, that will help us to transform ourselves........keeping others in mind becomes the basis of practice, and self cherishing becomes less. This type of love and care towards all beings is like a wish fullfilling gem, it is the most important thing, and when it happens, when can give it, it becomes easier to apply the antidotes to the mind poisons.
He said that we must totally see the destructive aspects in ourselves, and when we commit to that, our hearts become full of joy, we are clear, and finding the wish fulfilling gem in our heart frees us and gives us a confidence and certainty in the Three Jewels: the purpose of life becomes very clear.
The Karmapa also spoke about the importance of prayers to overcome obstacles, and asked that people put the Heart Sutra into their formal daily practice as it is a very strong antidote to the type of obstacles which prevail in our world at this time. 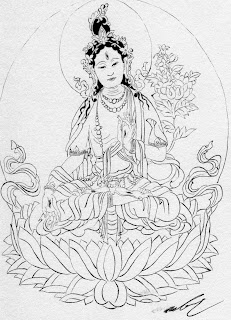 He also drew an image of White Tara which was printed, personally signed, and distributed to all who attended the teachings, along with his own calligraphic script of the White Tara mantra. The regular recitation of White Tara Prayers and mantras by us will, he said, help to clear the obstacles which he himself is facing this year.

The following Long Life Prayer for Ringu Tulku, composed by His Holiness Karmapa was written at the request of Ringu Tulku's students at Tergar Monastery, Bodhgaya, January 17th 2009.

'Unchanging illusion-like appearance
manifesting from the luminosity of perfect natural harmony
always unmarked by the signs of aging and decline
may you remain in the essence of the deity of immortality'.

translated by Ngodop Burkhar
'Kagyu Monlam is to spread the seeds of loving kindness and pure motivation, to activate their power, and hence bring about genuine peace, love, happiness and well being in the world.' H.H. Gyalwang Karmapa, Ogyen Trinley Dorje.
All information and transcripts of teachings can be accessed on the Monlam website at www.kagyuoffice.org and the Kagyu Monlam Blog.
A full history and meaning of Kagyu Monlam can be found here on the Unofficial Ringu Tulku Blog, written by Andy Lowe. 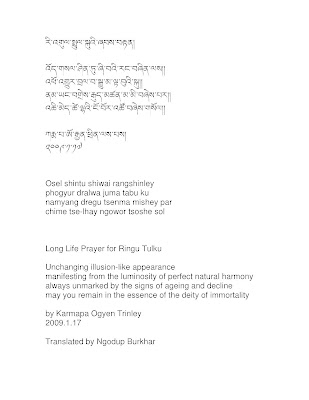 Posted by Bodhicharya Ireland at 10:21 No comments: Links to this post