Rinpoche's Shedra Teachings on the Two Truths given at Lerab Ling last weekend are available to download at the following sites.

www.rigpawiki.org / www.rigpashedra.org
Posted by Bodhicharya Ireland at 22:28 No comments: Links to this post

Live Webcast Teaching with HH the 17th Karmapa on 27th May 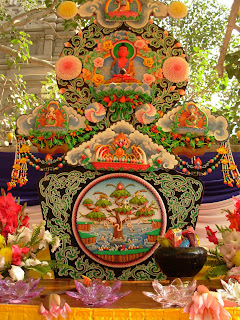 The following news has been received from the site, 'Living the Dharma'.
His Holiness Karmapa will address a teaching to the Kagyu sanghas and his students in Europe on Thursday, May 27th 2010 via a Live Webcast.
(www.livingthedharma.eu) will host the Live Webcast of His Holiness. That means this is the site on which you can follow the teaching of The Karmapa.
The teaching will take place starting from 11:30PM India Time (6:00 PM GMT , 7:00 PM BST, 8:00 PM CEDT, and 9:00 PM EEDT). His Holiness will be teaching in Tibetan and live English translation will be provided by Ringu Tulku Rinpoche.

There will be the possibility to download the teaching from this site at the end of the webcast.
May Karmapas activities appear in all its splendour!
Kindly inform all. This can be accessed by anyone but better to register.
Posted by Bodhicharya Ireland at 23:49 No comments: Links to this post 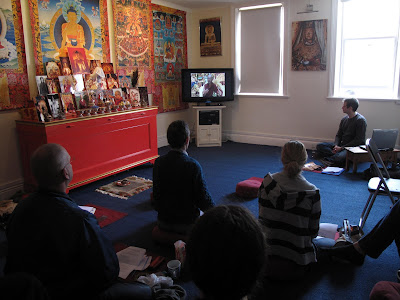 This weekend Rigpa Dublin welcomed Bodhicharya Ireland Sangha members into their shrine room in Wicklow St. Dublin to watch the live webcast of Ringu Tulku's teachings on the 'Two Truths' that was streamed direct (with a few interruptions on Sunday) from teachings at Lerab Ling in the Dordogne, France.
Unfortunately we missed the Friday night session, when Rinpoche introduced the short text by Patrul Rinpoche entitled 'An Instruction on the View of the Mahayana Clarifying the Two
Truths'. The text begins : 'For those who wish to attain liberation, there is both (I) the teaching on what is to be realised, and (II) the teaching on how to put this into practice'. 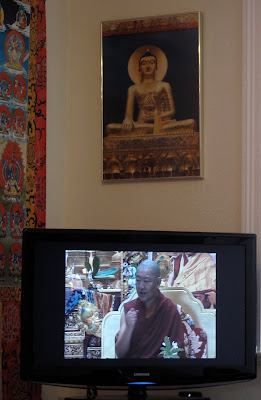 On Saturday Rinpoche began with the first instruction, 'Teaching On What Is To Be Realised' and discussed the three ways in which we can experience the Two Truths, (a) the stage of ordinary beings who perceive with grasping, which is termed the incorrect relative; (b) the stage of noble beings, who perceive appearance without grasping, termed the correct relative;
and (c) the stage of buddhahood where there is no ordinary appearance or non ordinary appearance - and because it is the absolute, concerns for grasping no longer apply, it is beyond grasping.
In this teaching Rinpoche continued to discuss the importance of seeing the natural condition of ones own mind, using the provisional understanding as a reference point until the ultimate understanding becomes clear - that the Two Truths are inseparable and that any type of provisional understanding is still a concept.
From the Nirvana Sutra : 'Emptiness means perceiving neither 'empty' nor 'non empty'. The natural radiance of emptiness can appear as anything at all. Since it is empty as it appears, appearance and emptiness are a unity. This can only be known by looking inwards. It is within the domain of your self-knowing awareness-wisdom'.
There are two sections in the text, with instructions on the Direct Practice for the sharpest faculties, and the Gradual Practice for those with duller faculties. The Direct Practice is a very short section and was taught very quickly, however the teaching on the Gradual Practice for dull faculties section is far more extended (!) and took longer to teach. 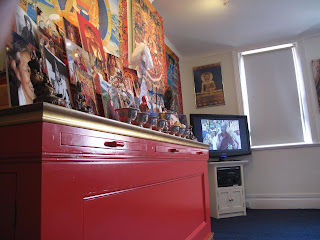 Rinpoche pointed out that it is the simplest teachings that we tend to overlook, because we think they are easy, but he said it is most important to begin with what is easy, because this will begin the journey towards transformation and help us to reach the more profound teachings. He encouraged us to remove ideas of emptiness from our conceptual thought, because if we don't we are grasping, so we must relax and just let the mind be with the current understanding.
At the close of the teachings on Sunday Rinpoche addressed the many people in the Lerab Ling shrineroom who have recently emerged from an intensive 39 month retreat. He spoke to them about the temptation to measure the achievements of practice, saying that the best progress is like life, it goes by unnoticed.
Many many thanks to Ringu Tulku who embodies these teachings with such grace and to Rigpa Dublin for opening this invitation to Bodhicharya Ireland to attend these amazing talks.
Advice from Machig Labdrön:
When nothing whatsoever is conceptualised
How could you possibly go astray?
Annihilate your conceptions. And rest
The text that was prepared for this study had been translated by Adam Pearcey.
Posted by Bodhicharya Ireland at 17:00 No comments: Links to this post 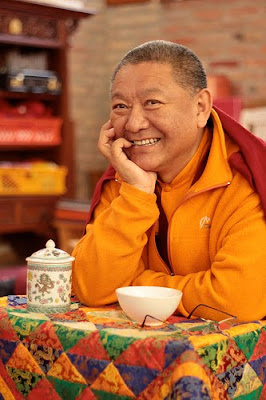 This weekend at the Rigpa Dublin centre [12 Wicklow Street, Top Floor], there will be a live streaming of Ringu Tulku Rinpoche's teachings from Lerab Ling
Ringu Tulku will be teaching on "A Short text on the Two Truths by Patrul Rinpoche"
The program of events is as follows
Saturday 15th May from 9:30am to 4pm
Sunday 16th from 9am to 12 midday
The event is open to all members of the Sangha
The cost of the event is 20 euro per day (12 euro concession)
Offering - It is traditional for students to make an offering to the Lama when receiving
important teachings. As such, everyone attending is invited to also make an offering
just as those attending the event in Lerab Ling will do.
Posted by Bodhicharya Ireland at 12:02 No comments: Links to this post

Pat Little shares her account of Rinpoche's visit to Dublin : 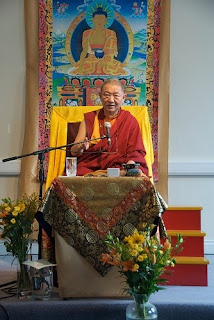 This year once more, Bodhicharya and Kagyu Samye Dzong Dublin had the great pleasure and privilege of hosting Ringu Tulku’s visit to Ireland. Because of the scheduled visit to Europe of His Holiness the Karmapa, the organisation of which had fallen to Ringu Tulku, there were to be none of the usual teaching visits to other parts of Ireland. The Bodhicharya group, conscious of their responsibilities, cast the publicity net as wide as possible in an effort to attract as many people as possible to the Dublin teachings.
The visit, however, came under the shadow of several negative circumstances: firstly came the news that the Karmapa, having been refused the necessary visa from the Indian Government, was unable to leave India; then we learned of the terrible earthquake to hit Yushu, Qinghai province on the China-Tibet border, causing great destruction and loss of life; and finally, the eruption of the Icelandic volcano provoked air travel chaos which prevented a number of people from abroad from attending the teachings, and disrupted the departure of Rinpoche and Lama Shenga. 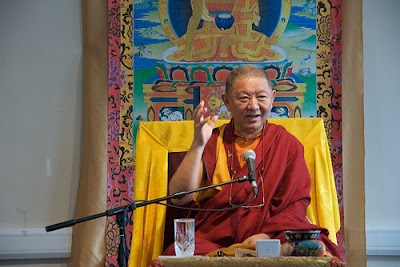 However, Rinpoche accepted these unpropitious events, both natural and man-made, with his usual equanimity, remaining the serene and radiantly humorous figure we know and love, giving teachings that were full of wisdom and insight.

For both the evening teachings at Kagyu Samye Dzong and the weekend teachings at the Writers’ Museum, he took as his core text Gampopa’s Great Teachings to the Assembly, in a translation on which he is currently working, and which has never before been presented in the West. At Kagyu Samye Dzong, he gave a commentary on ‘The Four Dharmas of Gampopa’, emphasising the transforming power of dharma practice, which extends beyond what we normally think of as ‘practice’. We have to understand that, so long as we have a samsaric state of mind, the experience of peace and fulfilment is not possible. 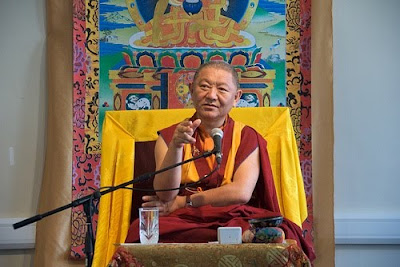 It is therefore a question of transforming the mind, so that, whatever the circumstances, we retain our equanimity. This is only possible when we learn to see things as they really are, beyond the duality of ‘myself’ and ‘other’, cutting through the illusion of independent existence and the permanence of phenomena. The objects of my perception are, in fact, no different from the mind that perceives, what arises is not different from me. The whole practice of dharma is therefore how to experience ourselves, and is necessary only because of our habitual tendencies. There is, in fact, nothing to practise, and no one who practises. To understand this, Rinpoche emphasised, is the only freedom, the great liberation. 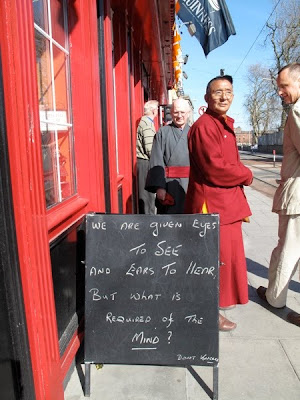 The weekend teachings continued the theme of ‘the nature of the mind’, with a commentary of the chapter bearing that title, and a further one, ‘Stabilising the recognition of the Nature of the Mind’. Rinpoche emphasised again the concept of interdependence, pointing out that it was the same thing as emptiness, which term, however, causes problems, especially for Westerners. Everything perishable is in a constant state of flux, dissolving and changing every moment, although our habitual tendency is to solidify phenomena to make them graspable. 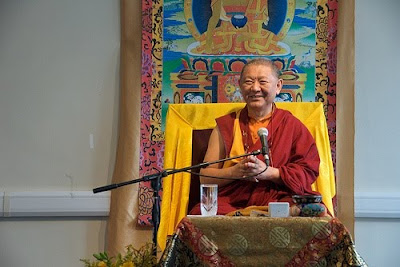 Mind, however, has no beginning, and therefore no end; it has no characteristics and is indestructible, beyond description and indeed beyond words. In its outer aspect, it is composed of perceived objects, which are no different from mind itself, whereas in its inner aspect it is perception itself. The two are, however, ultimately indivisible. Rinpoche was at pains to emphasise that the understanding of the nature of mind, far from remaining an abstraction, was the source of great compassion: it arises when we realise how much suffering we cause to ourselves and others when we fail to understand the nature of things.

The subject of compassion was also central to Rinpoche’s presentation of ‘The Qualities of a Genuine Teacher’. Deviating slightly from orthodox thinking on the role of the teacher, he suggested that it might not be altogether a bad thing to see the teacher as a samsaric being (while, of course, retaining the view of his or her Buddha nature), since the most important part of the relationship between teacher and student is the teaching. Drawing on his own personal experience, he declared that compassion is the essential quality of the teacher, and the one, therefore, that the student should seek to emulate.

With these and other precious insights, Ringu Tulku’s visit came to an end. Throughout, he made himself available in every possible way, graciously accepting our hospitality and participating in many informal discussions, as well as conducting numerous interviews. We thank both him and Lama Shenga for their inspiring presence and wish them safe journey in their dedicated work for the spread of the Dharma.

May all beings be happy.

Posted by Bodhicharya Ireland at 20:48 No comments: Links to this post