Ringu Tulku spent four days in Dublin at Kagyu Samye Dzong this year, continuing his teachings on The 'Heart Treasure of the Enlightened Ones' by Patrul Rinpoche, with a commentary by Dilgo Khyentse Rinpoche, and he focused this year on five stanzas on View, Meditation, and Action relating to the emotions, with instructions on seeing the kleshas or mind poisons as empty of themselves, to be self liberated using the six syllable mantra, OM MANI PEME HUNG.
A question was asked about meaning of the Dharani or Mantra that Do-Drupchen Rinpoche of Sikkim has suggested followers of His Holiness Karmapa recite for his good health, long life, and increasing activity. Here's  an edited transcript of Rinpoches answer:

"This a mantra or  dharani  is known as the Interdependent Dharani – it is called a stanza in Sanskrit.  OM YE DHARMA HETU PRABHAVA …..There’s a history to this:  Quite a short time after his enlightenment, when the Buddha became Buddha, he didn’t give any teachings for 7 weeks, he just relaxed, had a holiday in the forest. Then, he walked to Varanasi – another city, and there in the park called Rishipattana  –  known now as the Deerpark, Sarnath- he gave his first teachings to his first five students – and slowly they became arhats.  Then, a few years after that, there were two very bright people called Shariputra and Maudgalyayana who had a very good teacher – although he was not enlightened, he was very good.  This teacher realised he was dying and he said “Now I am dying I give all my students to you, because you are my best students, Shariputra and Maudgalyayana.  But they thought they were not good enough to teach, they didn’t want to guide these people, they wanted to find a teacher for themselves and went to search. They went in two directions, and agreed to meet later at a certain place. Shariputra went one way and met a monk, and when he looked at him, he knew by the way he looked, this was highly realised monk: by the way he walked, dressed – every movement showed he was very special and Shariputra was extremely impressed.
So he asked, “Who are you?”
“Just a monk”.
“Who is you teacher?”
“My teacher is  Buddha”.
“What does he teach?”
“YE DHARMA HETU PRABAVA...”

And when Shariputra  heard the first two lines of the stanza he completely understood something – he saw everything as it was, all doubts disappeared, and his mind completely cleared of all confusion.
When the stanza was finished, Shariputra had attained what  is known as stream entering stage – he fully understood the truth.  This stanza was actually about The Four Noble truths in a certain way, the four lines had the strength to completely transform him. He said, “I must see your teacher”.  He went to see the Buddha, and knew. He returned to meet his friend, and his friend saw him coming from afar and could tell by his appearance he had found what they were looking for. They both went back to Buddha and received some teachings together, and then returned to the other 500 students, and said, “We are going to be students of the Buddha. You don’t need to come if you don’t want to, but we will go”.
But the 500 students said, “Yes, we will follow you”, and so they became the first major sangha of the Buddha.  Both Shariputra and Maudgalyayana became Buddhas themselves, and the others became Arhats. Following that, these stanzas became the main mantra of Buddha’s teachings. The root text.  They are recited by everyone, Theravadin, Mahayana and Vajrayana students, everybody, because it had that kind of effect, it is a complete teaching of the Buddha, so it has deep meaning, but is also a blessing. So therefore, if you want to say a strong mantra for protection, to get rid of obstacles, clear the mind of confusion, say this mantra. You want to bless something, say this. It is for any occasion.
So this was changed from instruction to mantra with the addition of OM at the beginning, and SWAHA at the end.


The context of the recitations for His Holiness Karmapa is this: This year the Karmapa’s sister requested the advice of Do Drupchen Rinpoche, who is 90 years old and lives in Sikkim. Everyone asks him predictions, so many people come that he gets sick and has to stop seeing people and take a break. So His Holiness’ sister asked Do Drupchen Rinpoche what should we, the followers of Karmapa do for his wellbeing. So he said, “Recite this mantra and his life will be long and without obstacles, his activities will be good, he will benefit  a great many beings: so just recite this mantra”.   She announced this and everybody started to make commitments to say this mantra,  people in Tibet have committed a million, million recitations, individuals in other places have done the same thing also. So we put this up on our different websites and people have made commitments. There’s two things to say – one is that, to recite this mantra is accepted by all Buddhists, they feel it is very meaningful; and another thing, when you are doing something that is for others, from a Buddhist point of view, if I do some practise, say some mantras like this one, with the intention to make my own life better–– the result is not so much, but if I do it for others, then the benefit is much greater. Then, if I do something for someone who will themselves benefit many others, the benefit is much, much greater again. So, His Holiness Karmapa has been predicted to be the one who can perform the activities of all the Buddhas, so we will get huge merit and benefit from these recitations.  That is how it is". 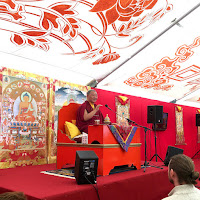 Rinpoche also taught for a weekend on Dealing with the Emotions, Riding the Stormy Waves, to a group of more than one hundred people, in a marquee at the beautiful Dzogchen Beara Buddhist Centre,  a favourite place overlooking the dramatic coastline of the Beara peninsula,  West Cork.  Dzogchen Beara is under the spiritual directorship of Sogyal Rinpoche.

More information on the Dharani of Interdependent Origination can be found on the Karmapa Foundation Website link prayers.
Posted by Bodhicharya Ireland at 22:52 No comments: Links to this post