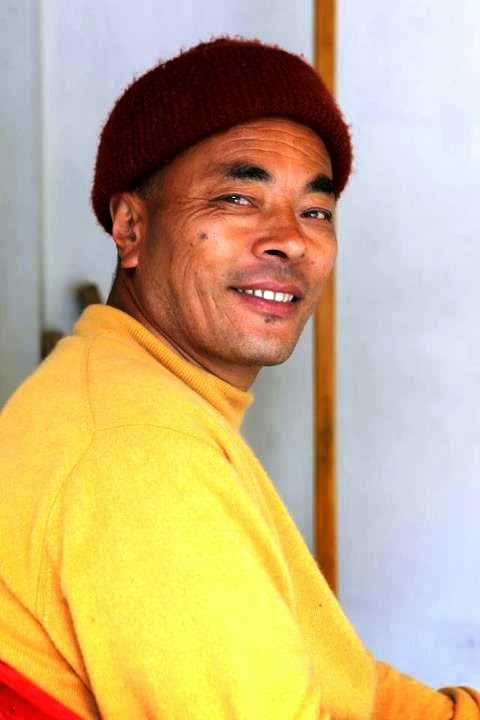 Sad news came today of the death of Lama Tsering Paljor yesterday in Tibet. Lama La was resident monk at the Bodhicharya Meditation Centre in Sikkim, and any who spent time there with him discovered a very special person, an absolute joy and inspiration to be around.
He constructed the fire house on the roof for smoke offerings, and every morning at dawn he'd light the brush and incense, and recite mantras and protector prayers to greet the day. We hardly noticed that he spoke no English and his method of getting to know us came via a really well worn photograph album with photos of himself taken through his lifetime, in Tibet, and during 7 years on retreat in Pharping, Nepal; as a chödpa, long hair,  damaru and kangling in hand.
Somehow, without a translator, he told us the story of his pilgrimage of prostrations from his home town to Lhasa, 1000 miles, it took one year, accompanied by his mother who carried provisions for them both on a donkey.  He laughed as he described the snow seeping underneath his coat collar, the resulting hole in his forehead, the broken hands and knees.  He was twenty years old at the time.
He arrived at BMC while we were in retreat in 2012, having been travelling away in Nepal, he was thin, and a little preoccupied. Never the less his reassuring quiet presence was comforting, and we always knew if he was in because he always sang, with a beautiful voice. He accompanied us on a trip up to Rumtek, and managed to persuade the guards to allow us into 16th Karmapa's rooms; he came with us to receive blessings from Dodrupchen Rinpoche, at an ungodly hour of the morning, insisting that we endlessly circumambulate the prayer wheels with him as we waited to go inside. As we took tea in the tea house together afterwards he was pensive, little did we know that he was, that morning, on the way to hospital and the first investigations into the cause of a difficulty with swallowing food.
Whenever Rinpoche came to teach, Lama La made his tea: we had no idea why Rinpoche refused what came out of the tea flasks we offered, until one day after he'd left, Lama Paljor invited us to his upstairs kitchen and made us the best chai we had ever tasted. He brought out his damaru and kanglings, taught us how to use them: the sounds of the kanglings ripping across the valley at 3 in the afternoon, as Hilary said, a chöd tea party.
A few months later  he was in hospital in Delhi,  Rinpoche had to translate for the doctors,  and as the full extent of his illness was revealed, he was able to relate that Lama La took the news as if going on a picnic. Almost eighteen months have past, and with the help of many dedicated friends who'd been touched by knowing him, Lama La was able to receive proper medical treatment, and return to his family and his homeland, to die.
Lama Tsering Paljor it was such a great honour to have known you, as we will again, for sure.

Requests for sponsored prayers for Lama La have been made to His Holiness Karmapa at Gyuto Monastery, to Tai Situ Pa Rinpoche at Palpung Sherab Ling Monastery, to Sangye Nyenpa, to Khenpo Namdrol Rinpoche at the retreat centre in Pharping, Nepal, to Mindroling Monastery, and at the Karma Kagyu College in Dehradun. His family are sponsoring prayers in Tibet.
Thanks to Ani Karma Wangmo, Erika Van Greunen, Margaret Rinchardson for the updates on sponsored prayers.
If you'd like to add a personal note or tribute, please go to the article on Bodhicharya International Website where you can also leave a message under 'comments'.

click logo for Bodhicharya International website
The three hands on the Bodhicharya Logo represent the three main activities of Healing, Helping, and Harmony.